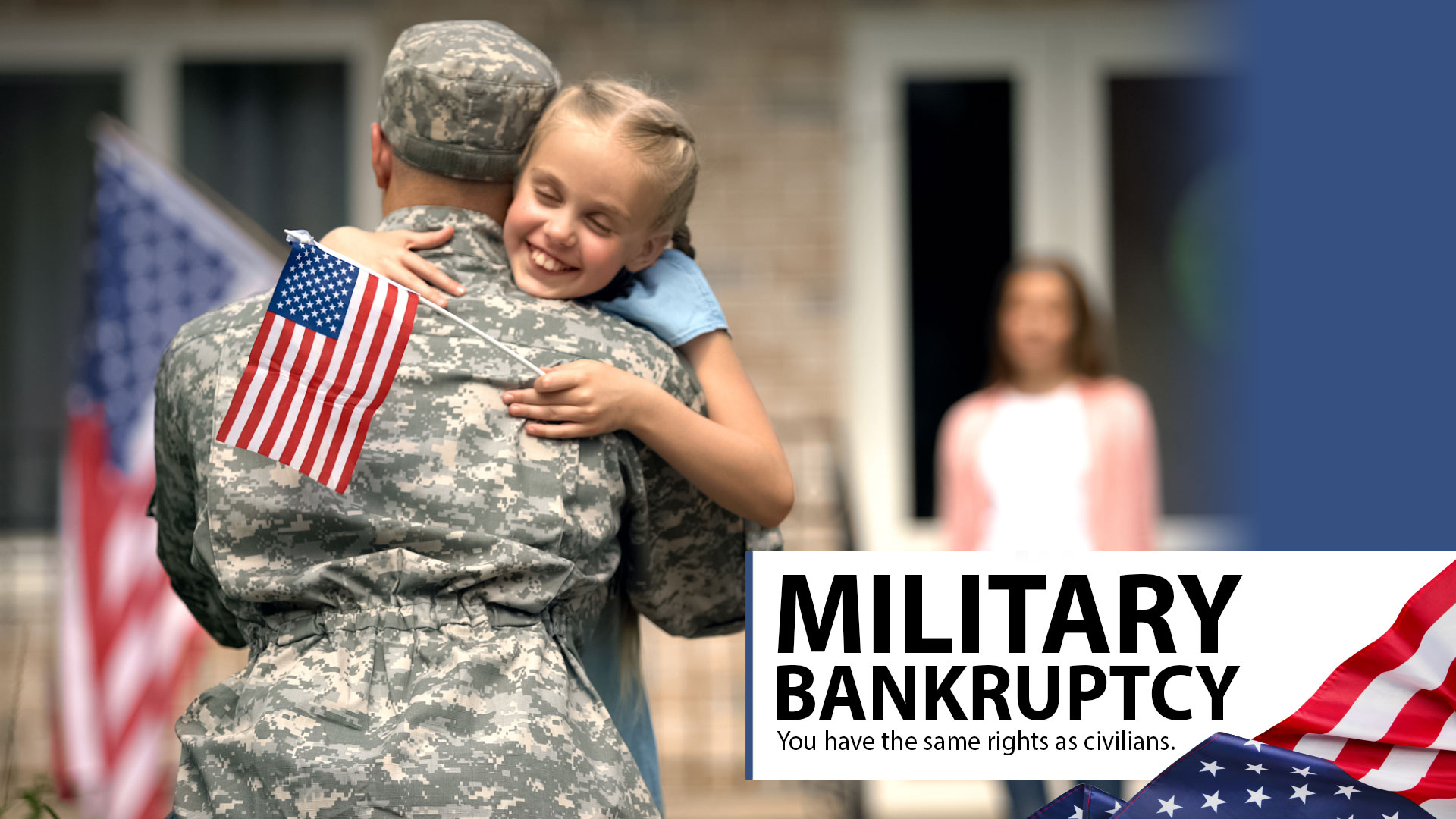 However, most of the time the indebtedness is unavoidable, unexpected or too late to reverse. Fortunately, the DOD acknowledges your right under federal law to avail yourself of bankruptcy to resolve your financial difficulty.

Most of the time your financial situation is not a concern of the military until it is brought to the attention of your commander or your security clearance office.

Even at that point we can intervene with a bankruptcy and explain to your command and security processor to reverse the damage. Don’t wait until the military is threatening to separate you from service. Call today and meet with one of our experienced attorneys to help you take your financial stress away and let you focus on the mission and your family.

Will I lose my security clearance if I file bankruptcy?

Bankruptcy alone is not a disqualifier to retaining or receiving a security clearance.  In fact, it can save your job and clearance. Generally, an individual who is delinquent on his/her debt has a greater risk of losing their clearance.  A bankruptcy eliminates the debt or sets up a repayment plan with the creditor.

Will the creditors continue to contact my Command after filing bankruptcy?

No. We will notify them immediately upon filing to discontinue all communication with your command. Filing of bankruptcy prohibits creditors from attempting to collect on a debt.  Contacting your command would be in direct violation of your bankruptcy protection and could subject the creditor to sanctions.

Can the JAG office assist me with a bankruptcy?

No. The local JAG office can not represent you in a bankruptcy proceeding.

Can I be booted out of the military for filing bankruptcy?

No. Under the UCMJ Article 134, you can be separated from services for failure to pay your debt.  However, bankruptcy is considered a federal right, and assuming no other disciplinary issues, will generally eliminate this as a concern.

Will my Command be notified that I filed bankruptcy?

No. We do not notify your command of your bankruptcy filing.  If your pay is being garnished, DFAS will have to be notified of the filing to halt the garnishment.

Can I eliminate my STAR Card debt in a bankruptcy?

Yes. While the STAR Card has special status outside of bankruptcy by virtue of being affiliated with the military, in a bankruptcy it has no special status.  It can be eliminated without any ramifications to your military career.

Will filing bankruptcy keep me from getting promotions or affect my evaluations?

No.  In as much as your Command is not notified of your bankruptcy filing, this information is not available to them and therefore does not affect promotions and evaluations.

Does my bankruptcy filing affect my spouse if they do not file?

Special Considerations In A Military Bankruptcy

Unlike civilians filing bankruptcy, military service members have unique considerations when they fall into financial distress and consider filing a military bankruptcy.  While the list here is by no mean exhaustive, I put it together to make service member realize that with the right attorney even the most complicated military hurdles can be navigated.

While Congress has attempted to provide military service members protection through the passage of the Servicemembers Civil Relief Act (SCRA) in 2003, military member are more vulnerable to collection activities in many instances than civilians.  Here are a few examples:

Remember – These are just a few of the more common special issues faces by military servicemembers considering bankruptcy.

Whether you are a military service member or a civilian contractor working on a project for the DOD, financial mismanagement can jeopardize your ability to get and keep a security clearance.  The effect of bad or delinquent debt on your clearance depends on a multitude of factors including the level of your security clearance and what led to the debt.  However, one of the most important factors is whether the indebtedness and default has been resolved.  Bankruptcy can help.

Bankruptcy Acknowledged By The Military & Contractors As A Solution

The filing of a Chapter 7 or a Chapter 13 bankruptcy is acknowledge by both the military security investigation services as well as civilian clearance investigation services as an acceptable was of resolving financial issues.  As a federal right you have protections backed up by federal law against being discriminated in many situations should you file bankruptcy.  The stigma of bankruptcy that was felt many decades ago has been proven invalid in the eyes of the federal government and specifically the military branches.  The realization was that just because people have had past financial difficulties which have been resolved, it didn’t make them a security risk.  However, the problem that does exist for those holding or applying for a security clearance is unresolved financial difficulties. The thought is that if you are under stress due to your financial situation you are more likely to be vulnerable to financial coercion in return for providing classified information.  Studies of spy cases from penetrations of military intelligence, the Central Intelligence Agency (CIA) and all levels of government point to financial coercion as one of the top motivations in cooping an individual into spying. Filing a bankruptcy not only eliminates the debt, it removes the suspicion of your vulnerability to such coercion.

Losing your security clearance means losing your job in most cases.  Filing a bankruptcy means saving your job, eliminating the debt your have been stressing about, reestablishing your credit and a less stressful more financially rewarding life. The security clearance adjudication process looks at the “whole person” or “totality of circumstances” when weighing whether to issue or reissue a security clearance.  Resolving your financial issues alone does not guarantee a security clearance.  If you have multiple issues that raise concerns about your access to classified information you may still be denied a clearance. As a former CIA officer, attorney John G. Merna is personally familiar with security clearance issues and adjudication.  We have helped hundreds of service members, DOD civilians employees and civilian contractors avoid the loss of  their “tickets” due to debt. Don’t wait until the security office is processing your application or reinvestigation before you take steps to resolve your debt.

As a member of our armed forces, your position and circumstances are different from those of a civilian when it comes to the legal processes in Virginia.  A few of the considerations are the affect on your job, the rule and laws that apply specifically to military personnel, security clearance considerations, and many other issues that can arise.

The experienced attorneys at the Merna Law Group have handled hundreds of cases for service members. From bankruptcy to divorce, custody, or wills, Merna Law Group is familiar with the unique requirements of military clients.

Iour experience, we honor your service and commitment by extending a 10% discount to all active duty service members.  To receive this discount please provide the code “wsmil10” when scheduling an appointment.

IS BANKRUPTCY RIGHT FOR YOU?

Considering bankruptcy can be a confusing and emotional process. This process is often filled with misinformation. We have helped thousands of people just like you work through that process. We are here to help you too.

SHOULD YOU CONSIDER BANKRUPTCY?

Did you know, the three main causes of bankruptcy is divorce, severe illness and job loss? Many people are afraid of bankruptcy because it seems like an admission of failure. Nothing could be further from the truth.

ACTION NOW COULD SAVE YOUR HOME

A foreclosure is the legal process wherein the mortgage lender or judgment lienholder forces the sale of a home by auction to either get the outstanding balance paid by the foreclosure buyer or takes back the title to the property.